Our 2020 Season Finale by Bob Spruck

Season Finale’, huh? Some season it‘s been! Well, it WAS still the finale’, but to a shortened season for sure. The Wild Hare Run at VIR in April and the Jefferson 500 at Summit Point in May were cancelled thanks to their respective state’s responses to the pandemic. Georgia had relatively open rules for gatherings enabling the Club to hold the Hurricane in Savannah event in September at Roebling Road Raceway near Savannah, the Veterans Day Historics in November at Road Atlanta, and the Season Finale in December back at Roebling. In addition, the Club itself published and enforced their own standards, including the use of masks at Registration, Tech, and in the paddock, social distancing, abbreviated Tech procedures, and Drivers’ Meetings over the PA system rather than at a traditional close packed gathering of drivers. Even the famous Pig Pickin’ and Oyster Roast on Saturday night was replaced by almost equally delicious prepared individual barbeque rib take-aways but with no social gatherings or programs. Registration at the three events was only slightly less than in previous years and there were even a number of first timers - a testament to pent-up demand and the reputation for plenty of track time and safe racing that VDCA has worked hard to earn over its 20 years in existence. Plus, this was a three day event with plenty of track time and weather that couldn’t have been better – 70 degrees during racing hours!

After a Thursday afternoon of registration, tech inspection, paddock set-up, and linking up with old friends in a socially distanced manner, of course, Friday practice and qualifying started out in dense fog. Fortunately, the BMW club we shared the weekend with was first on track and bored a hole in the low hanging clouds for us vintage guys. Each of the four vintage race groups was able to get in a practice session and a qualifying session while the BMW boys and girls fit in a couple of school sessions, some practice time and even a few races.

The day culminated with the always fun Happy Hour Bracket Race. This event is under the direction and at the whim of Technical Director/VDCA Board member/FF racer Doug Meis and always presents the participants with a challenge as well as some fun. This time, each member of the three man teams declared a target time and the differential between each driver’s predicted time and his best time on the track was combined for a total team differential which determined the winning Team. However, there were a few other rules extant. Happy Hour themed team names counted for an unknown amount of influence. Happy Hour themed decorations also played a part in deciding the winner. An “oddball” calculation known only to Doug that was too subjective or too hard to comprehend was also included in the formula that determined the winner. After all was said and done, Team SASCO was declared the winner. Don’t ask how or why! Which Team won wasn’t important. The fun was on the track and at the presentation of the prize.

Serious stuff began on Saturday with the series of Saturday Races and Feature Races for each vintage group. Group 1 for small displacement production cars and Formula Vees was the largest and liveliest Group, as usual. The father/son team of Chip and Casey Haddock, both racing LeGrand DSRs, started on the third row but stayed together through some Spridget traffic until Chip led by lap 4 with Casey closely behind. Despite having the fastest lap in the race, Chip’s lead lasted only until lap 11 when he came in and Casey maintained the lead until the end. Bob Lembcke (1966 MG Midget) started fourth but passed everybody by the end of the first lap to stay in first place by a large margin until the Haddock family got by him on lap 5. He eventually finished a strong second. Richard Schnabel (1961 MGA) drove fast enough to finish third, passing a bunch of Spridgets who put up a good fight. The 6 FVs were split up at the start and had a tough time making it to the front because they couldn’t find drafting partners. Well, some occasionally did, and were able to pull up behind the “big” small production cars but didn’t seem to be able to get by their invisible bow waves. Mike Ennis (1969 Lynx) got delayed by a few Spridgets but was able to get in line behind Mike Jackson (1969 Shadowfax) at the start of the penultimate lap but Jackson held him off and led at the checker by two feet!

Group 2/5/7 is made up of the Formula Ford classes and smaller displacement sports racers. Other than Mike Kennedy (1962 Lotus 23R) and Cecil Boyd (1960 Lotus 18 Formula Junior), this weekend’s sessions were comprised solely of Club spec Formula Fords. Scott Fairchild, in a 1978 Zink Z-10, led flag to flag but was challenged continually by one of the three clean green and blue liveried Hawke DL17s of Tim Nichols, Joe Griffin, and Glenn Brooks. It was hard to tell them apart unless you could read the numbers as they wizzed past. Each led the train fighting over second, third, and fourth until Griffin pitted on lap 8 leaving Nichols to maintain position 2 and Brooks in 3rd at the end. Tom Fraelich (1979 Crossle) and Scott Nettleship (1981 Crossle 45F) had a nice time midpack. Mike Kennedy continued to develop his new Lotus 23R, overcoming some ignition and tire problems in practice to finish the races in a happy mood. Of course, the Formula Junior of Cecil Boyd was ever beautiful and provided him a great ride and us spectators a lot of envy.

Mid-size production cars and sports racers were classed in Group 3. Ray Morgan went unchallenged from flag to flag in his well running Merlyn Mk 6 as usual. Mazda Miatas are now vintage eligible and seem to be monopolizing the excitement and finishes like the Spridgets do in Group 1. Since Morgan was way out front in a race of his own, the next few positions were where the action was. Herman Porter (1972 Porsche 914/4) quickly got past Joe Mills (1990 Miata) but was then passed by Ken Schuster in a Miata and then by Mills a few laps later as Mills gained some steam. The craziest race was between Hank Giffin (1959 Elva Courier) and David Bane (1990 Miata). For six laps in a row, they traded places as they passed the start/finish line. There’s no telling how many times they passed on the backside of the track. It was Bane who finished ahead as Giffin faded on the last lap. Since Hank was the last one off the grid at the start, he got lots of practice passing all the back markers and Bane six times.

The big loud cars were in Group 6 and 8. Bill Feaster had the biggest, the loudest, the brightest, and the fastest car (1967 Camaro) at both the green flag and the checker. Blake May (1974 BMW 2002) races one of the prettiest and well-engineered (and fastest) cars in the Group. He passed bigger Porsches and pony cars to come in a strong second. Jeff Fisher (1964 Lotus Elan 26R), Ernie Bello (1974 Opel Kadette GT/E), and Ceaser Cone (1967 Alfa Romeo Duetto) had some good racing mid-pack. Two of the more interesting cars in the Group were Bradley Steele in a 1964 Ford Falcon and Darrell George in a 1966 Mustang GT350.

One of the VDCA claims to fame is the one hour Endurance Race on Sunday morning that is open to all entrants and, in fact, is included in the entry fee. It seems quite anachronistic to have over 25 cars, from the deep thunderous Camaros and Mustangs to the high-pitched whining sports racers, circling the track loudly for an hour at 9 o’clock on a Sunday morning and then schedule a mandatory quiet time at eleven, but that’s what the track’s neighbors say they can live with. As could be expected, Dave Handy in his 1988 Swift DB2 started on the pole and ran away from the field by lap 2 and won an hour later four laps ahead of everyone else. Bill Feaster in his 1967 Camaro ran well in second place until Anthony Branco caught him in his 1974 Ocelot “Batmobile” for a long run in second, taking over first while Handy was in for his mandatory five minute pit stop. Handy came back strong and quickly resumed the lead until the end. With 25 cars of all displacements, there was a lot of exciting racing throughout the rest of the field. Steve Sanguinetti (1965 Lotus Elan) and James Rees (1974 Porsche 911 RSR) may have started at the rear but stayed close to each other as they advanced quickly through the pack to be a real challenge to the leaders. Rees eventually finished a worthy third while Sanguinetti ran out of steam and ended in ninth. Another close pack race included John Hasty (1959 Triumph TR3A), Stirling Heath (1971 MGB GT), Mike Morrison (1975 MGB), and David Bane (1990 Miata). Ceasar Cone (1967 Alfa Romeo Duetto) and Joe Mills (1990 Miata) looked like they had a long and fun battle together.

After an hour on track, covering 42 laps by the winner, and one pit stop each, the big race was over. Sure, some drivers had had enough and retired. A few had mechanical issues and came in early. Others used the opportunity for additional laps or testing without really competing. But most took the Enduro seriously and raced hard. Barry Kaplan, Race Steward, commented that he was impressed with the enthusiasm of the competitors, the dedication of the Board of Directors, and the hard work of the many volunteers. Most of all, the competitive and safe racing was the result of the enthusiasm of many vintage racing enthusiasts.

Let’s hope that next year we will see a resumption of full schedules by all the race organizations and a return to the norm we vintage enthusiasts have come to appreciate so much.

F&S has made the pictures from the Wild Hare Run available: click on the business card

Our 2020 Season Finale by Bob Spruck 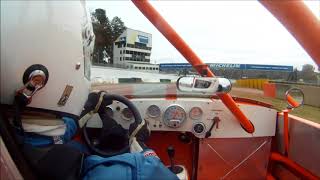 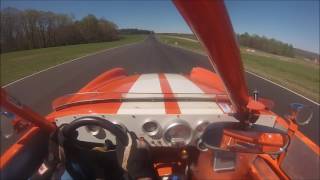 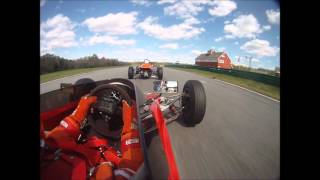